What You Should Know About Zero Calorie Noodles And Weight Loss 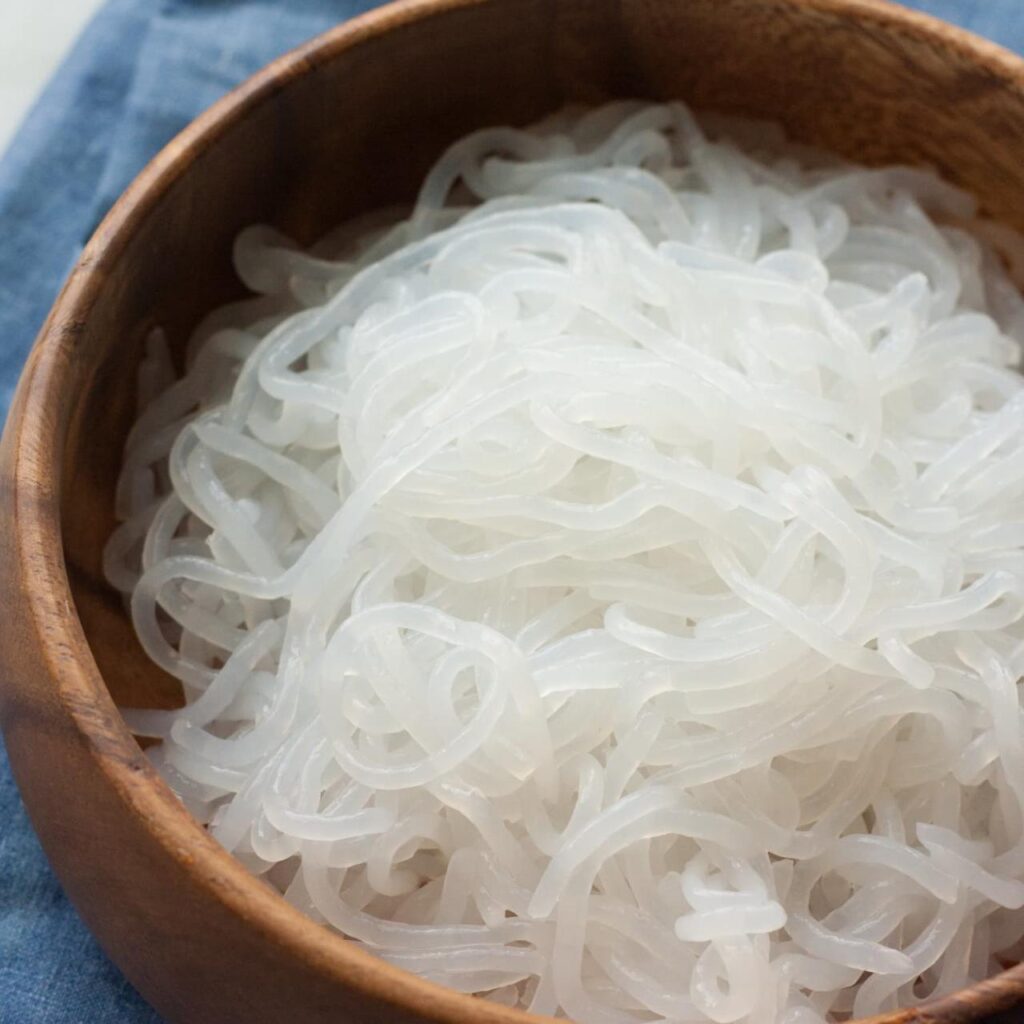 Traditional noodles have up to 138 calories per 100 grams. While it may not be overly substantial, it may worry those looking to look weight. Noodles have also been found to contain a minimal amount of protein and fibre and thus may not properly support your weight loss, and its intake may not make you feel full for long, thus leading to overeating and gaining weight.

But what if I told you there is a type of noodle that can make you feel full, yet it has meager calories? Yes, you head that right. It is called shirataki noodles or zero-calorie noodles.

These ‘magical’ noodles are packed with glucomannan, a fibre known for its remarkable health benefits, and studies have even shown that this type of fibre can help in weight loss exploits.

So, what exactly are shirataki noodles?

This plant is native to Southeast Asia, China, and Japan, and it has minimal digestible carbs, but most of the carbs are derived from its fiber. The term shirataki means ‘white waterfall’ in Japanese and references these miracle noodles’ translucent appearance.

Shirataki noodles are made by blending glucomannan powder with lime water and distilled water. The mixture is then boiled and then cut into rice-like pieces or noodles. The resulting noodle contains around 97 percent water and just 3 percent fiber, and very low digestible carbs and calories.

The fiber found in shirataki noodles, glucomannan, is known for being highly viscous. High viscous fiber is a soluble fiber that, as the name suggests, can absorb water and create a gel. According to studies, this fiber can drink water 50 times its own water, thus explaining why the noodles have a high water content.

Due to high water content, the shirataki noodles passé through your gut very slowly, helping you feel full for longer as well as delaying the absorption of nutrients into the bloodstream.

Glucomannan is also known for acting like a prebiotic, meaning it helps the thriving of the bacteria found in the digestive system, bacteria known as microbiota or the gut flora. These bacteria then ferment the fiber into SCFAs (short-chain fatty acids), which can help prevent inflammation, increase immunity, and provide a host of other benefits.

According to a recent study, the fermenting fiber to SCAFs only produces a single calorie per gram. With that in mind, a typical 4 ounces or 113 gram of shirataki noodles, which is a single serving) contain around 3 grams of this fiber, making the noodles essentially calorie-free.

Miracle noodles are a potent tool for weight loss. Since it has viscous fiber, it significantly delays the stomach’s emptying, meaning you will stay full for more extended periods, thus eating less in the day.

Moreover, the fermenting of glucomannan into SCFAs has been found to aid in triggering the release of a stomach hormone that enhances the sensation of fullness. Additionally, consuming this fiber before eating carbs reduces the hormone called ghrelin – the hunger hormone.

There have been around seven studies conducted in the past. One study found that people who took the fiber found in shirataki, glucomannan, without accompanying it with another type of fiber, burned a lot of fat on a strict diet.

In another research, overweight people consumed fiber every day for two months and lost up to 5 pounds without altering their workout regime or diet.

However, another study found no difference at all in weight when obese people were subjected to the same survey.

In all these studies, they used between 2 and 4 grams of fiber, which means that the magical noodles would most likely have the same weight loss results.

With that being said, there is no single study conducted on shirataki noodles to back the claim that they can contribute to weight loss. But note that there are currently no studies to support this claim. The studies mentioned above were conducted on the fiber glucomannan, which is also found in shirataki noodles, so the noodles’ conclusions can help with weight loss are transitive.

Another thing to keep in mind when using zero-calorie noodles for weight loss is that timing is an essential factor. In the studies, glucomannan supplements or tablets were taken an hour before meals. This is tricky because you will be using shirataki noodles as a meal or part of it.

In 2020, a woman filed lawsuits after the undigested fiber found in the magical noodles had formed a bezoar (a solid mass) in her gut. Although noodles have been a staple food in many Asian countries for many centuries, their popularity in the West is deemed to be due to their purported weight-loss claim. Carol Brodie, a Home Shopping Network host and a jewellery designer, consumed too much of the noodles, which caused stomach complications. As a result, she was forced into another diet consisting of just diet coke and soup for over a month. The lawsuit she filed was against the manufacturer Green Spot Foods and Amazon for allowing the product to be sold on its platform.

If you look at the product in question on Amazon, you will see it is poorly rated at 3.5 stars by more than 300 customers. Some of the users complained of GI distress and terrible nausea, while others noted ‘unholy levels of gastric upset and rage.’

With that in mind, make sure you know what you are up against before using shirataki noodles for weight loss. However, some people recommend drinking a lot of water when consuming konjac noodles due to a large amount of highly soluble fiber it contains. If you must eat magical noodles, remember to go slow on it.

Other benefits of shirataki noodles

The fiber found in zero-calorie noodles has been found to help decrease blood sugar levels in people, insulin resistance, and diabetes. Because the fiber slows down the stomach’s emptying, insulin and blood sugar levels rise gradually with the absorption of nutrients into the bloodstream.

One study found that people who have type 2 diabetes who consumed glucomannan for up to three weeks experienced a substantial drop in fructosamine, a compound known for being the marker of the body’s blood sugar levels.

A separate study on people living with type 2 diabetes found that those who consume a single dose of fiber before eating glucose experience a substantial reduction in blood sugar levels a couple of hours later.

Research has also found that the fiber found in shirataki- glucomannan – can reduce cholesterol levels in the body. This is because glucomannan can increase the cholesterol passed out in the stool, meaning a minimal amount is reabsorbed into the bloodstream.

According to findings, this fiber reduces ‘bad’ LDL cholesterol by about 16 mg/dL, with triglycerides by 11 mg/dL.

This fiber can also boost bowel movement in adults and increase the number of gt bacteria and the production of short-chain fatty acids.

Side effects of glucomannan in zero-calorie diet

As we have seen above, shirataki is not without scandals. The fiber in these noodles can cause mild digestive complications, including bloating, loose stool, and flatulence. Nevertheless, many studies have found glucomannan to be safe. And just like any other fiber, the best way to consume glucomannan is to gradually introduce it into your diet to deliver the desired result.

The fiber can also reduce or prevent the absorption of some medications, such as diabetes drugs, so make sure you take the pills an hour or so before or up to four hours after consuming zero-calorie noodles.

How do you prepare shirataki noodles?

Zero-calorie noodles are not easy to prepare for first-timers. They are usually packed in water that may smell like fish due to the effects of konjac root. Because of this, you will need to thoroughly rinse the noodles several times using fresh tap water to get rid of most of the smell.

Hit the noodles in a frying pan for a few minutes without oil. This is to remove excess water (remember shirataki noodles are highly hydrated) and allow them to acquire the normal noodle texture. Too much water will make the noodles a little bit mushy.

Here is a simple zero noodle recipe if you would like to prepare some:

Ingredient #1: Get 200 grams or 7 ounces of zero-calorie noodles (shirataki rice will also do)

Ingredient #2: Get butter or extra virgin oil that you will use to grease the ramekin

Ingredient #3: Get 85 or 3 ounces of cheddar cheese, grated

Ingredient #4: Get ½ tbsp. of common salt

Ingredient #5: Get tbsp. of butter

This recipe should take less than half an hour to prepare. Note that these noodles are extremely easy to prepare if you get the hang of them, and you can use them in a range of dishes.

To prepare shirataki noodle macaroni and cheese, follow the below steps:

Shirataki noodles usually don’t have taste or flavour, though you can give them a flavour by cooking them in a soy-based sauce. The zero-calorie texture is chew and rubbery.

Where can you buy zero-calorie noodles?

You can easily buy shirataki noodles from Amazon or any Japanese or Asian grocery store in your local area. Some significant supermarkets tend to stock them as well, so make sure you check there too.

How do you store the noodles?

As you know by now, shirataki noodles have an unappealing stench, but don’t be tempted to remove the odour and then store the noodles. You must hold the shirataki noodles in their original wrapping with their smelly water. If you remove them from the package, keep them for up to 3 days in the refrigerator. If you want to remove the stinking water, rinse the noodles and then boil. Store them in the water you boiled them in. put them in the fridge or freezer, although the texture will probably change.

Shirataki noodles or zero-calorie noodles can be an excellent substitute for traditional noodles and pasta. Besides having insufficient calories, these magic noodles can also keep you full for many hours, preventing you from eating a lot. We have also seen that they can also reduce blood sugar levels, regulate cholesterol, and enhance your digestive system.

Workout Challenges to Try This Year

What are the health benefits of cold water showers?

Shakes Vs Shakeology: Which One Is Better For...

Cheap alternatives to Shakeology that you should consider